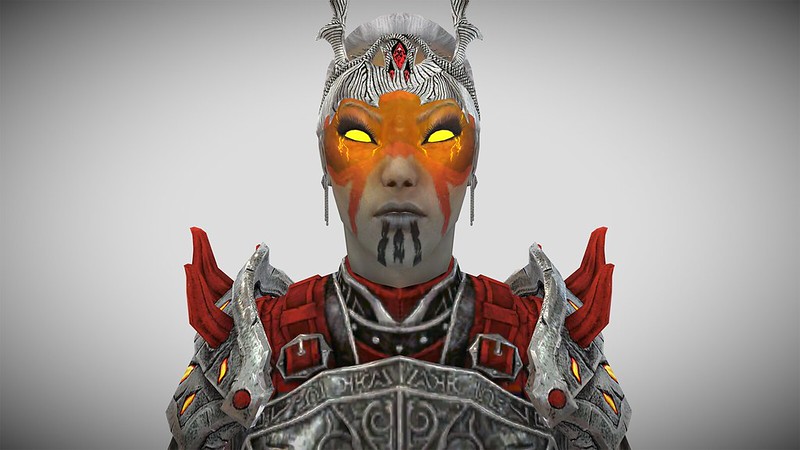 Cinbri didn't remember her early life as a child. For as long as she remembered, she had been living in Ebonheart in a family of House Redoran, and had always been fascinated by the nearby Ash Mountain.

She joined the Tribunal and became a holy paladin of the Living Gods to make her parents proud. She passed through a lot of battles for the glory of the Tribunal but her entire life she had been hearing some voice calling her, singing to her a song of her true fate.

Journey after journey and destiny finally brought her to Vvardenfell. There, Cinbri was led by the song to the Ashlands in hopes of finally finding her destiny and maybe a home... And she found it - Kogoruhn, but the only things that were waiting for her were ash and bones.

Her suppressed childhood memories were restored by the leader of the pariahs - Wakener Maras, and she recalled the cruel fate of her true family and her House, who were slaughtered by the Tribunal and their followers in attempt to cover their own crimes from long ago, while she and other children were taken by the people who butchered their real families just to be raised as servants of the Tribunal who were behind the massacre.

Now she knows who she is - Dagoth Cinbri, and her destiny is to liberate Morrowind from the foul murderers and enslavers of the Dunmer, those who call themselves the Living Gods of the Tribunal. The Sixth House will rise, and Dagoth is its Glory!

#ESO 2023 chapter details have been datamined from today's patch! You can check them out in the ESO Model Viewer Discord server - https://t.co/CCTfJGf1NO pic.twitter.com/aqG4rFG49d